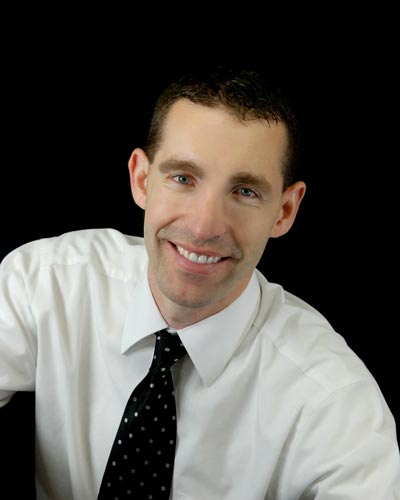 Dr. Sean Tarpenning has a long history of achievement from his younger days in high school to college and now in his professional life. In high school, he achieved numerous academic awards and along the way participated in hockey and tennis. As a Collegian, he was an active officer in the Alpha Phi Omega Service Fraternity (founded by the Boy Scouts of America), numerous academic organizations, and worked as both a Christian Camp Counselor and in a nursing home during his summer vacations.

Now, as a dental professional, Dr. Tarpenning has been a two-time president of the Chippewa Valley Dental Society, and has spent hundreds of hours on post-doctoral training with a focus on Complex restorative dentistry. He has authored two books about dentistry.

Dr. Tarpenning has been married to has college sweetheart Melissa for over 10 years and they have three beautiful children together – Aidan, Keiran, and Rowan.

As a child, Sean grew up in Rice Lake. He lived there until the passing of his father. Later he moved to Rochester, Minnesota, where he went to high school. He then attended Luther College, located an hour south of Rochester in Decorah, Iowa, for four years where he got his B.A. in Biology. He then attended the University Of Minnesota School of Dentistry.

Upon graduation, Dr. Tarpenning was an adjunct fixed prosthodontics instructor at the School of Dentistry, and from there joined Dr. Hebert in his practice in 2000. He has a wide range of interests, including athletics as he was an Eau Claire youth hockey coach. Dr. Tarpenning is still an active hockey player, enjoys bicycling, and runs “for a cure” in a ½ marathon in San Francisco every year.

To experience our 5-star-rated dental care, schedule your Complimentary Hebert Dental Assessment today by calling 715-835-0606 or clicking here for our convenient online form. Your appointment includes:

During your appointment, we will take the time to answer your questions about our treatments, our dental office, our flexible payment options, and anything else you may want to know about us. We look forward to meeting you!